A:   SWIS stands for the Society of Weight-Training Injury Specialists, founded by chiropractor/powerlifter Dr. Ken Kinakin. Dr. Ken periodically hosts an amazing 3-day conference outside Toronto, Canada, that brings together hundreds of bodybuilders, powerlifters, nutritionists, trainers, coaches, and injury therapists for lectures, workshops, networking, and special events. I was thrilled to be invited as faculty in 2015 and again in 2016. The October 2016 symposium was completely off the chain, with sports legends like strongman Bill Kazmaier, 6-time Mr. Olympia Dorian Yates, and IFBB pro Mindi O’Brien, along with dozens of experts in the field of strength and fitness. 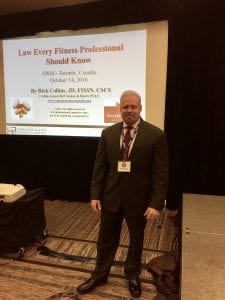 In addition to my presentation, “Law Every Fitness Professional Should Know” (I then flew directly to Jacksonville, Florida, to present on the same topic for the NSCA’s personal trainer conference), I was invited to sit on the “SWIS Nutrition Panel: Supplements and Steroids – Myths, Misconceptions and the Truth.” Moderated by strength science guru Dr. David Sandler, and recorded by filmmaker Patrick Rivera, it was an incredible roster of researchers, academicians, and athletes including Kaz, Dorian, and, notably, Olympic sprinter Ben Johnson. Johnson, you may recall, was the Canadian track and field athlete who smashed the world record in the 100m at the 1988 Seoul Olympics at a blistering 9.79 seconds, winning the most-watched race in history, then tested positive for the anabolic steroid stanozolol. He was stripped of his gold medal and disgraced, although it is now thought by some that steroid use was widespread in track and field at the time. 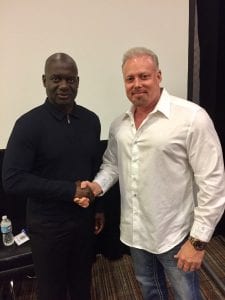 Meeting Johnson in person for the first time was surreal. It was his doping scandal that outraged the U.S. Congress about steroids in sports, prompting hearings and the passage of the Anabolic Steroid Control Act of 1990 (ASCA), which punted steroids into the War on Drugs. It’s only in recent years that such drug prohibition policies have been increasingly viewed as a failure. The ASCA, its successors, and similar state laws have not stopped doping but have resulted in many thousands of Americans being arrested and prosecuted for steroid crimes, including simple possession for personal use.

Much of my practice over the past 25 years has been dedicated to seeking justice for people accused of breaking laws regarding steroids, and I’ve had the opportunity and privilege to help countless people whose court cases may otherwise have been handled based on ignorance, misinformation, or propaganda. And, in a sense, I owe my entire legal niche practice to Ben Johnson.

If you missed SWIS 2016, the video bundle is available at http://swisvideo.com/products/swis-symposium-2016-video-bundle. I’ll surely be speaking at the next SWIS, set for 2018! Don’t miss it!

Reprinted from Rick’s monthly column in Muscular Development magazine. [© Rick Collins, 2017. All rights reserved. For informational purposes only, not to be construed as legal or medical advice.]